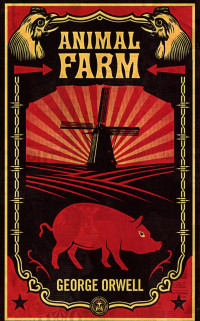 Noblest and most worthy animal:
Among the various characters in the novel, Boxer is for me the noblest and most worthy of them all. He works, works and works, but he doesn’t complain about anything he is asked to do. In fact, he doesn’t ask anything about the life on the farm and how it is lead. This is a big mistake, thrusting blind on what Napoleon tells him to do. If there isn’t enough food, it doesn’t matter to him. Boxer worked very hard on the windmill, transporting all the heavy stones and materials. But asking nothing and working this hard, became his end, whereby he is send to the ‘hospital’ what was in reality a slaughterhouse. Although he believed in Napoleon, but Napoleon betrayed him, even though Boxer had worked so hard for him.
The horse Boxer represents someone of the working class (proletariat) in Russia during the Russian Revolution, who is loyal and has huge capacity for labour.
Quotes:
‘I will work harder.’ – This is his response to all problems, but it ends up with that he collapses of the hard work.
‘Napoleon is always right.’ – Boxer beliefs in the Communism, no matter what, although he only knows the basic points about it. He doesn’t know what happens in secret.

Suited leader against Napoleon and the pigs:
He is an old, but wise donkey, Benjamin. In the book he doesn’t say something very often, and when he says something it’s not always clear what he means. Except from the pigs, Benjamin is the only animal on the farm who can read written things. It’s a big advantage over the other animals who can’t read. The intelligence and the ability to read and write brought the pigs control over the farm, so Benjamin can do that too.
Benjamin was also the only animal on the farm not inspired by the Rebellion of Napoleon. He thinks of him as a dictator. He thinks nothing has changed from before the Rebellion and after it. Although he doesn’t want he rebel against Napoleon, he would be a great leader for the ones who want to. In the end of the book he realises that the pigs were always wrong.
Benjamin represents the aged population of Russia. They though the Communism wouldn’t help them for a better future. They didn’t criticise it and eventually lost their lives. But he also represents the Jewish population, who were there before and after the Revolution.
I think Benjamin would be a great leader against Napoleon is because he is the only smart animal on the farm to rebel. He can do this with his knowledge of his long life. It’s a pity that he doesn’t use it, that he stays in the background of everything, not interfering all the time. Other qualities for a great leader could be that he knows what others want, and that he can do something about it. He needs an own view on the things he wants to change. But a leader also needs comrades who can help him make difficult decisions, which he can’t handle on his own.
Quotes:
‘Donkeys live a long time. None of you has ever seen a dead donkey.’