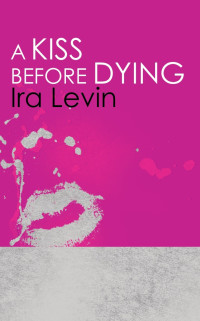 Meld je aan!
The title of the book: A Kiss Before Dying
The author: Ira Levin

About the author:
Ira Levin was born in New York City on the seventh of August, 1929 and is a graduate of the Horace Mann School and New York University. A Kiss Before Dying is his first novel; it was published in 1952 and has been in print ever since. Rosemary’s Baby followed, and was made into a film. His other novels include The Perfect Day, The Stepford Wives and The Boys from Brazil. He has also written several very successful plays, short stories and song lyrics.
He lives in New York and has 3 sons.


Explanation of the title: The title is A Kiss before Dying because in the book Bud (the murderer) gets involved with his victims before he kills them.

These are the main characters because they have got the most lines and are the most important persons...

Place and time
The story is set in New York and Blue Rivers, in the universities Caldwell, NYU and Stoddard and in the Blue River Municipal Building.

Time involving from the beginning till the end: three years, they mention the dates in the book when they found the yearbook.

Type book: "A Kiss Before Dying" seems to me a story with many elements involved. The cover says it's a novel, but there are also a lot of detective-scenes. And you could consider it as a psychological drama as well, because the trains of thought and the feelings of the principal persons are described.

Other ending:
`…he hadn’t noticed his right hand open but it must have opened because he was dropping into the heat, cables were shooting up, someone was screaming like Dorothy going into the shaft and Ellen when the first bullet wasn’t enough, then he noticed, he was the one screaming this god-awful scream and he couldn’t stop.´
The fall seemed like it was taking forever, but then without noticing he felt a cable in his hand. His instinct must have made grab it. It wasn’t even two meters to the ground. He survived the fall but now knew how Dorrie and Ellen must have felt. He looked up and saw Marion crying. Her father and Gant standing next to her. Marion looked at him and said: `At least he has confessed, now he’s going to prison for the rest of his life. But that wasn’t going to take away the pain he had caused.´ He smiled and was satisfied. He was still alive and they couldn’t prove a thing. But he had confessed. That was a big mistake. But he could tell the police they were lying, but they wouldn’t believe him, they would believe Kingship. And then he was grabbed by his feet. It was the police. It was over.

My opinion: I liked the book very much. The author sure knows how to keep things exiting! She always ends the chapter with a thrilling moment, which made me want to go on reading. I detected only one small thing where I was beginning to feel bored about; In the part called "Marion", we caught sight of the inside of the factory of Mr. Kingship, by looking through Buds' eyes. But in my view she was endlessly persuading about it, I got tired of it. I would certainly recommend it to my fellow students, but only if they were in to drama because this book is very dramatic.

Summary:
The book is divided into three parts, called: Dorothy, Ellen and Marion. At the beginning the story is written from the murderers sight, Ira lets you know what he thinks and how he feels about the situation, but his name isn't mentioned until Gordon Gant reads the letter Ellen wrote to her boyfriend Bud Corliss. Further on in the story the author also lets you know the thoughts of the other key-characters, like Ellen and Dorothy. Bud Corliss is a young man who comes from a poor family. In spite of the lack of money, Bud always achieved very good. Because his father was a looser, Bud's mother placed all her hopes on her son.
Bud wants his mother to be proud of him and the best and easiest way to get there is marrying a rich girl.

Part 1; Dorothy
Bud and Dorothy, whose father was very rich, were going steady. Then she got pregnant and wanted to marry him. He didn’t want that because he was after her father’s money, and when he would marry her without him knowing and then seven months later get a baby, her father wouldn’t approve and he wouldn’t get any money. So he gave her some pills so she would lose the baby. But they didn’t work. His solution was to kill her. So he did a lot of research and was going to kill her by giving her some pills with arsenic in it, telling her to take them ‘because the first pills he gave her weren’t the right pills’, so they could try again to lose the baby. But she didn’t take them. He told her they would get married but first made her write a suicide note by giving her a suicide note in Spanish and then he asked her to translate it. They went up to the Blue River Municipal Building. She thought they were going to get married, but he was actually going to kill her. He sent the note to Dorothy her sister, Ellen, so everyone would think it was a suicide. They went up to the roof to enjoy a romantic moment, she thought . She was sitting on the wall around the airshaft and he kissed her. They had a cigarette and he threw her into the airshaft. She was dead.
He got away with this murder because everyone thought it was a suicide and he was proud of it. So he didn’t get the money yet. So what! He was young, only twenty-four years old!

Part 2: Ellen
Ellen didn’t believe Dorothy killed herself. So she investigated and the more she found out, the less she believed it was a suicide. So she went to Blue River to investigate. After about three days of investigation Ellen knew exactly what had happened to her sister, but she just didn’t know who did it and she didn’t have any proof. She went to the Dean of Stoddard, the school her sister went to, and asked him some names of the boys who were in Dorothy’s English class because she knew he had to be in there because Dorothy wrote her that she had a boyfriend who was in the English class with her. She said she had to know those names because Dorrie owed someone money and she wanted to pay it back to him. So she came up with two names. Dwight Powell and Gordon Gant. She first went to Gant and found out he wasn’t the one who had killed her sister. So it had to be Dwight Powell. Gant wanted to help her with her investigation and so he did. It turned out it wasn’t Powell also, but he knew who could have done it but he just couldn’t remember his name, but he had the name written down somewhere so they went to his place.
What she didn’t know was that the boy she was dating actually was the murderer of Dorrie. And he had followed her to Blue River and knew everything she had found out because she told Gordon in a booth in a restaurant and he was sitting in the booth next to it. She was getting to close. So he killed Powell and Ellen. But he wasn’t any closer to the money so he planned on going to New York to the third sister. Marion.

Part 3: Marion
Bud went to New York and was learning everything about Marion so he could make her love him. He met Marion with the excuse that he had some stuff from Ellen that he wanted to give her. He got her to love him, knowing everything she liked and disliked and pretended to feel the same about those things. They were going to get married.
Meanwhile Gordon Gant had figured out everything Bud did and went to Leo Kingship. At first Marion and mr. Kingship didn’t believe him so Gordon was going to investigate some more so he could find more proof to convince them that he was right.
Bud had kept some stuff which proved he knew Dorothy and that he transferred to Caldwell, the university where Ellen was a student, around the time Dorothy died. Gordon found this when he broke into Bud his room in Massachusetts.
Gordon showed his new findings to mr. Kingship and Ellen and convinced them that Bud was after the money and that he had killed Ellen and Dorothy.
They pretended nothing was wrong and gave Bud a tour in the factory where they make copper, the place mr. Kingship owns. Pretending Gordon was a college of mr. Kingship.
Gordon and mr. Kingship brought Bud up to a place where he couldn’t go anywhere, and asked him questions and threatened him that they would kill him so that he would confess. He confessed but then jumped himself. He was dead.