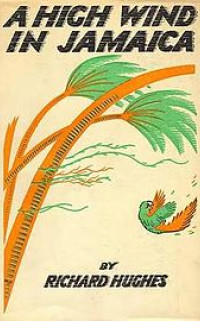 A High Wind in Jamaica starts on Jamaica where a British family, Thornton, lives with five children. Mr. and Mrs. Thornton are afraid that the kids are growing up uncivilized not learning about their real culture and they decide to send them back to England.
So the parents send their children with a boat to England, but after a couple of days sailing their boat is attacked by pirates. The pirates take besides the valuable stuff, also the children on their boat. Then the real adventure starts, the children need to do their work on the ship and even see pirates kill other sail men. They also get hurt and lives are been taken too.

In this story you see the children change in their behaviour and how children react on such an adventure in their short lives.
The genre of this book is adventure; the group of children goes through the adventure of their lives. Sailing towards England captured by pirates, relatives wounded and died around them, this all makes it a very hectic journey.
The developing of some children like Emily’s, is very special. The five children, included Emily, are still afraid of the pirates, but getting used to the life at sea. Emily is a bit different then the other children and doesn’t play with them; she is busier with the pirates and even thinks that she is in love with the captain. This special role for Emily on the boat gives her a lot of influence in the end of the book. The children also think very weird about certain subjects, Rachel says for example: ‘In short, babies have minds which work in terms and categories of their own which cannot be translated in the term an categories of the human mind. It is true they look human – but not so human, to be quite fair, as many monkeys’.
The way this book is written is very special and very funny. The quotation, which is given before, is a good example of the funny parts in A high wind in Jamaica. And because the writer tells you in a chronological way what happened during this adventure of these five children and speaks to the reader is quit special. It also switches from the first person tot a narrative person, which makes the story quit interesting to read.
In the end A High Wind in Jamaica is recommendable to everybody. The story is not to long, though it contains a lot of hectic and exciting moments which keeps the reader anxious. The developing of the children and he attitude of the pirates against them is fascinating to read and let you think about what pirates can do for children and otherwise.