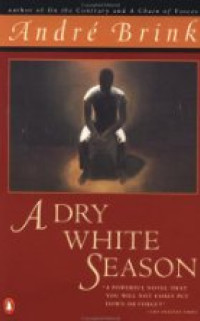 It is written in 1979 by André Brink, and the genre is racism.
The main character of the book is a white man Ben du Toit. He lives in Johannesburg and teaches history and geography at a school. One day, Ben asks to the writer of the story, they know each other from university, to keep his papers and stuff. The writer doesn’t understand what’s it all about, but Ben insisted the man to keep it to himself. The writer promises. Two weeks later, Ben was dead. He was hit by a car. The writer tells a lot information about Ben and his wife Susan, as a kind of introduction. The writer tells Ben was a closed person to him but also to his wife Susan.

The story is a flashback. It all really begins with the death of Jonathan, the son of Gordon. Gordon is a cleaner at the school where Ben works. Ben don’t know him very well, but something he do now was that Gordon was a very nice man. Ben always helped him when he was in trouble at school. When some money disappeared from the classrooms, there were teachers who always blamed Gordon.


It happens in July, in one of the demonstrations for equality. Almost daily black children and youngsters, including Jonathan, meet each other to walk to Johannesburg as a demonstration. The police tries to stop the demonstration with violence. Some children see Jonathan in the crowd and they run to his family to tell them. But in the evening, Jonathan is not back. Gordon goes to see a friend, Stanley, a black taxi-driver who knows everything about everything in the town. He asks him for news about Jonathan, but it is too difficult for Stanley to find this out. The Special Branch reports Jonathan has died the natural way, but witnesses say something else. Ben decides to help Gordon, but the Special Branch also picks Gordon up. Gordon’s wife Emily is worried, and a few days later the Special Branch reports Gordon has committed suicide. Of course Ben and Emily don’t believe it. First Ben beliefs that the government of South Africa is fair. The fact that his friend Gordon is arrested and then commits suicide, must be a terrible mistake. But the more he finds out en investigates, the more he beliefs the government is corrupt. In a case, Ben and Emily against the Special Branch, the decision is not guilty, even when Ben has a lot of evidence After the case is closed, Ben meets Melanie Bruwer, a journalist. She becomes a very good friend
Then Ben goes to the doctor who investigated Gordon before his death, but he won’t tell anything about the physical condition of Gordon. After a while, the Special Branch searches in the house of Ben, maybe to intimidate him.

Ben, Emily and Stanley continue their investigation. Ben is a good man and he wants justice, but there are more black people with problems and they go to Ben to ask him for help. But Ben can’t help all the people, and after a while it frustrates him and he don’t want to help other people anymore. Melanie, the journalist also helps him with the investigation.
The relation between Ben and Susan gets worse, so to save their marriage Susan decides to go away for a few days. Ben feels lonely then, so he goes to Melanie and sleeps there. When Susan comes back to Ben, she finds a envelope with pictures, pictures of Melanie and Ben in bed. The whole family is shocked by the behaviour of Ben, they noticed that Ben acts strange the last few weeks.

Ben can’t speak to Melanie or Stanley for a while. Melanie is in England, and the Special Branch follows Stanley. One day, he decides to visit Stanley, but Stanley told him not to do that. Only Stanley’s wife is home and she tells Ben that he has to go. He walks back to his car and then a group of black gangsters attack him. They keep throwing stones at him, even when he says he is on their side. Luckily, he can escape. This is an important moment of the story, because Ben sees the difference between black and white people. The black people hate the white people, because the government, also white, repress them. For example the black people are not allowed to stand up for their rights

Since the family-drama, since Ben cheated on Susan, Ben can talk very good with his daughter Suzette. He tells her about Melanie, about Gordon and about his investigation. One day he visits Suzette and he tells her the hiding place of all his important documents about the investigation. In the evening he changes the hiding place, because he thinks it is better no one knows about is, and the next morning someone broke in who was looking for the documents. Ben realises he can’t hide the documents for the Special Branch, so he calls an old friend, the writer of this book, and asks him to keep the documents. Two weeks later he was hit by a car and died. He was about to post a letter.


The writer tells in a Epilogue that Ben called him immediately after he discovered the burglary in his garage. They met each other and he gave all his documents to the writer. Tthe writer receives a letter from Ben, posted a week after he was dead. In this letter, Ben describes how he feels, and he writes he is very worried, he thinks he will be killed soon by the special Branch. Maybe the Special Branch decided the writer should receive the letter, as a warning or a threat.