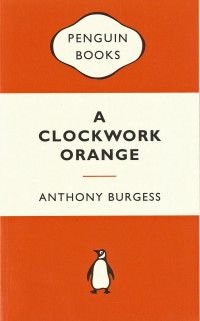 Summary:
The book is about Alex and his friends Pete, George an Dim. They are out on the streets at night, robbing some people or hanging around in The Korova Milkbar, a bar where they serve milk with drugs. One night, after doing some other violent things, they decide to go to a house of an old woman and rob her. Many things go wrong and Alex is forced to hit the woman knock-out. When he comes out of the house again, he hears the police sirens. Only Dim is still there. Dim hits Alex down with his chain and runs away. Alex can't get away from the police now and gets arrested. He hears from them that the old woman is dead.

Then Alex is in the jail in Staja . He's condemned for killing the old woman and has to stay in jail for 14 years. Over there he's trying to get out earlier by telling the Jail Priest all kinds of things about the other prisoners, about conspiracies and drug deals. He also asks something about Ludovico's Technique. A new way to become a free man in 14 days. He certainly wants to be part of it. He shares a cell for three people with five other people. One day there comes another guy in their cell. This man tries to rape Alex. Together with his cell mates he hits the man down. The next morning the man is dead. Because of this Alex is need to go to the Governor. The Governor says that he's going to be part of Ludovico's Technique. From now on it gets better. He gets a new cell, a new pyjama's, good food, … Alex gets an injection every morning. Because of this he can't walk anymore. After the injection he need to go to a room. Over there they show him all types of films about ultra-violence on the streets what he used to do himself, films about the cruelties that the Nazi's have done. During the Nazi propaganda film the 5th symphony Beethoven is played. Because he likes classical music he thinks it is an outrage to use Ludwig's music.. The result of these films and the injections is that if he thinks of violence or listens to the fifth symphony, he gets very sick. When he's totally brainwashed (after 14 days), he is let free by the minister of Inferior.


Than he is back in the free world, he decides to visit his mum and dad. They haven't heard that he's free again and they're very surprised. They think that he has escaped. There lives a new man in Alex's room, called Joe. His parents tell him that they can't kick Joe out of the house, so Alex has to leave. After that Alex decides to go to the library to relax. In the library he comes across a man that he has robbed from his money and clothes This man and the other people in the library want to lynch Alex. Alex wants to hit back, but he can't, because he gets sick from the violence.

When the police arrive, Alex sees that it are his old friend Dim and his old enemy Billyboy. They've become policemen, because of a plan of the government to make violent kids policemen, so that they can behave violently to other criminals. Alex gets taken by them to a forest outside the city and gets beaten up by them. Again he can't do anything against it, because of this sickness. When he comes to awareness again, he walks back to the city and knocks on the door of a house. He has been at this house before, back in the old days with his friends. They have raped and killed a woman in that house. A man, called F.Alexander lets him in. He takes care of him very good. He gets introduced to the friends of this man, who are very interested in him, because he can help to smash the government. In the meantime F.Alexander starts to realize who Alex is and what he has done. One morning when Alex wakes up, he hears very loud music of Beethoven, put on by F.Alexander as a revenge. He gets sick again and attempts on suicide by jumping out of the window. He survives this fall and gets into the hospital. When he comes to awareness he's cured from the brainwash created by Ludovico's Technique.

Personal opinion
I find it a good book but it is very difficult to read because it is written in Nadsat. This is the language that ultra-violent kids speak at that time. The book shows what kind of awful things people can do. (maybe it’s a little bit exaggerated in this book…)